Meet Ramona, leading the way for women in construction

According to the Women in Construction Summit, the UK construction industry employs a huge 2.1 million people. Of this, only 11% are women – but why is this the case?

A report published by Randstad in 2020 showed that 72% of women surveyed had experienced some form of gender discrimination working in construction. This, coupled with a lack of female industry role models and existing gender pay gaps suggests that the construction industry isn’t always an attractive career proposition for women.

Bucking the trend is Ramona Florian, who has been working on site for Peldon Rose at one of our latest projects in Soho. Speaking five languages and with 20 years’ experience in construction, including six spent in London, it’s surprising to hear that Ramona still faces discrimination in the workplace.

“My father was a carpenter, and I grew up in Romania learning the trade from him,” she says. “I have brothers too, and our father would take us all out to work with him.”

Since then, she has continued to learn on the job, alongside studying and qualifying to become a certified construction supervisor.

“I love the fact that you’re learning all the time on site. From reading the drawings, interpreting what needs to be done and then laying the bricks or fitting the tiles, you learn so much working on different projects.”

However, often the hardest part is getting the opportunity to step foot onto a construction site. Ramona has experienced instances where job applications are immediately rejected because she’s female, with agencies arguing she ‘isn’t physically strong enough’ to carry out the role.

“Once I arrived at a job and was almost immediately turned away for being a woman. They mistakenly thought my name was ‘Ramone’ not ‘Ramona’.

“Thankfully, I persuaded the construction manager to give me a task and a deadline so I could prove that I knew what I was doing. I finished the job ahead of time and convinced them to let me stay.”

Changing perceptions about women in the industry

Ramona believes that having better support from male colleagues will help shift attitudes, and has enjoyed her time working with Peldon Rose construction manager, Jon Elmes:

“I’ve learned a huge amount from Jon, he has given me responsibility and supported me in demonstrating to others on site that I am fully qualified in my role.”

Joining the discussion, Jon adds, “I rely a lot on Romana to support me in supervising the wider team. Unfortunately, there is still a gender imbalance across construction sites. If we see women on site, it’s rarely in a construction role.

“it’s so important to challenge the preconceived ideas about what women may or may not be able to do.”

“All of the men on this site have now worked first-hand with Ramona, they can see she’s excellent at her job and can manage others well. The next time they encounter a woman on a future project, they’ll remember Ramona and the example she’s set for women in the industry.”

Despite facing discrimination during her time working in construction, Ramona believes it’s also important to be a role model for future generations of females in construction:

“When you’re faced with adversity, it’s easy to give up, but then nothing will ever change. Instead, I use setbacks as motivation to prove I can do my job just as well as, if not better than, some of my male colleagues. Undeterred, Ramona insists, “When you enjoy your job, you do it better.”

Finishing our discussion with a renewed enthusiasm, Ramona remains optimistic that the future is bright for women in the industry:

“Having these conversations is the first step to making a difference.”

With aspirations to one day become a construction manager herself, the sky’s the limit for Ramona. Her drive to break down barriers for women and campaign for gender equality is palpable and we can’t wait to see what’s next in her career. 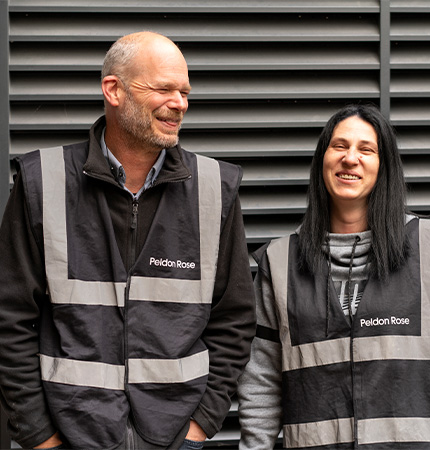 Your workplace holds enormous potential to improve your business performance. Get in touch today, and we will unlock that potential together.

Stay up to date on the latest in workplace design & build. Sign up to our newsletter for useful advice, information and inspiration from the world of workplace.